This year, MICUA brought together almost 100 college students and administrators from MICUA member institutions to celebrate the strength and continued success of the students in independent higher education in Maryland, as well as the funding of the Sellinger Program.

Governor Larry Hogan proclaimed February 24, 2021 Maryland Independent Higher Education Day (IHED) and encouraged the people of Maryland to support independent institutions. This year, IHED was virtual due to the pandemic. We hope to be together in person in Annapolis next year!

For more than two centuries, Maryland’s independent colleges and universities have partnered with the State to increase educational opportunities, expand college access, and support local businesses. Shortly after the American Revolution, the Maryland General Assembly passed a bill granting a charter to Washington College, which embraced a mission to “educate citizens for the vital task of democracy.” Within two years, the General Assembly chartered St. John’s College as an institution of higher learning. These two private, nonprofit institutions formed the foundation of Maryland’s system of higher education with campuses on the Eastern Shore and the Western Shore.

Today, Maryland boasts a distinctive and diverse array of private, nonprofit institutions of higher education that are committed to serving the public missions of education, research, and the advancement of knowledge.

MICUA hosted IHED 2021 virtually via Zoom Webinar. Andrea Chapdelaine, PhD, Chair of the MICUA Board of Trustees and President of Hood College, provided welcoming remarks; then Senate President Bill Ferguson delivered a keynote address. President Ferguson is a native to Maryland, born and raised in Silver Spring, and he currently represents District 46 in Baltimore City. In addition to a bachelor’s degree in political science from Davidson University and a law degree from the University of Maryland School of Law, he holds a Master of Arts in Teaching (MAT) from the Johns Hopkins School of Education. President Ferguson described the path by which he went from classroom teacher to law student to politician to one of the youngest presiding officers in the State Senate. He spoke of both inspiring and humbling experiences along the way, and he challenged everyone in the room to demand nothing but the best of themselves, their colleagues, and their leaders. He had time for a few questions, and the students responded passionately and appreciatively to his remarks.

Following President Ferguson’s remarks, Sara Fidler, President of MICUA, gave a PowerPoint presentation that included key facts about MICUA and MICUA’s operating and capital budget requests, as well as tips and tricks to help the students successfully lobby members of the Maryland General Assembly. MICUA encouraged students to tweet about IHED and to tag pictures of themselves with legislators. Students arranged almost 100 meetings with members of Maryland’s General Assembly. MICUA institutions met with every committee in the legislature. When students were not in virtual meetings, they were invited to participate in the MICUA "hangout room" on Zoom to connect with each other and to share their experiences.

Some key points the students shared with Legislators included:

“Independent Higher Education Day is such an important opportunity for MICUA institutions to share with our elected officials all the great activities happening on our campuses. We knew we needed to find a way to still make it happen this year,” stated President Chapdelaine. “This is a day to celebrate our students and their accomplishments, as well as express our deep gratitude for the long-standing public-private partnership between MICUA and the State. While IHED will be virtual this year, I look forward to the day when all of our institutions can be back in Annapolis, in person.”

Featured below are photos of Independent Higher Education Day 2021: 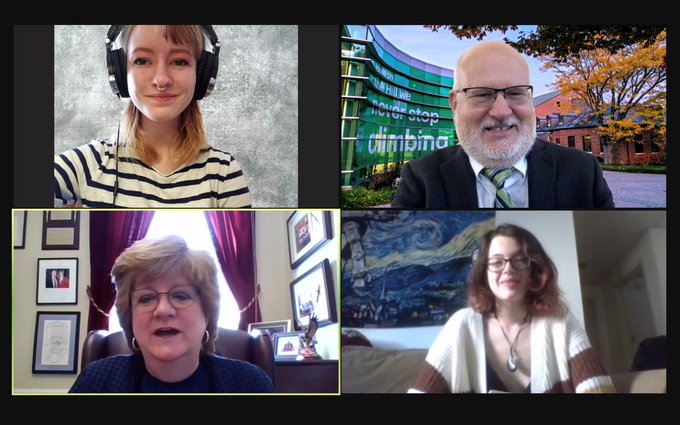 Featured below are photos of MICUA students on Independent Higher Education Day 2020: